The August Marvel Collector Corps crate theme was "Secret Wars" and cost $45 USD, or about $70 NZD. This is the first Marvel crate not tied to a movie release so makes things a bit different. 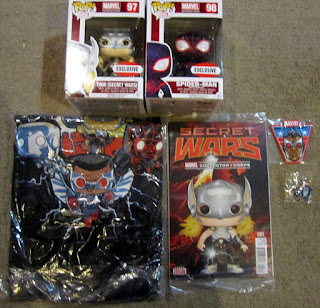 The shirt is another official Pop! product and is very nice. The print is really cool, much better than the Ant-man one as it is more prominent. 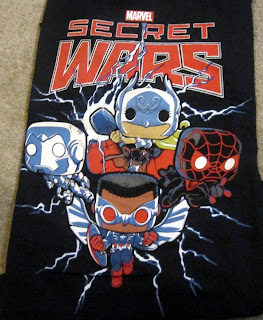 The comic is an exclusive cover of the Secret Wars #1, featuring a Pop! Thor. Nice, but as the comic has been out for a little while I already have a copy. From the May Comic block, with an exclusive cover as well. This is a shame and with the theme as it is, not surprising. It was at least bagged and boarded this time, so an improvement. The badge and patch are both cool, I'm liking my little collection. 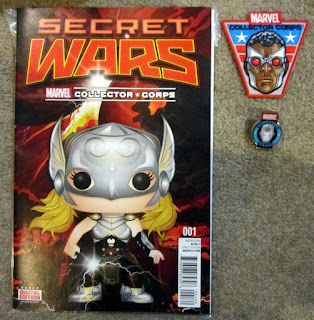 Last up are the figures. Not one, but two Pop! vinyls this time. This is excellent. The Spiderman and Thor figures are both great, the Thor doesn't balance very well, all the hair at the back means it doesn't really bobble either though. Not a big issue (most people seem to keep these in box anyway, weirdos... *Joking*) so I'm really happy. 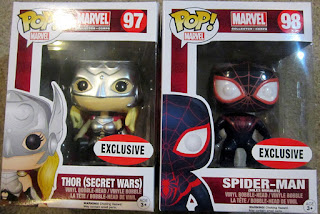 This is yet another solid offering from Marvel Collector Corps. I feel like this is what Loot Crate and Nerd Block set out to be in their infancy but have since deviated. For me, I want cool figures, shirts and pins/badges/patches. Comics are a bonus. By sticking to this formula Marvel Collector Corps will keep getting my money. As long as it is spare anyway.

The pattern is looking pretty clear now: Shirt, Pop!, Comic, Pin, Patch and a wildcard figure. Nothing wrong with that in my books!

The value of this crate: for a Pop! shirt, 2 Pop! vinyls and a comic you would expect to pay $90-$100. For any given geeky shirt and 2 Pop! figures you could pay around $70. Either way you slice it you are still getting a little ahead, definitely not losing money.

The next theme is yet to be revealed, it should be in the next few days though...

If you want your own you can subscribe here.
Posted by LavaJohn at 20:30