The June Marvel Collector Corps crate theme was "Ant-Man" and cost $45 USD. (About $69 NZ.) This crate was a little late due to some payment issues with my initial subscription but is still available if you start a new subscription. 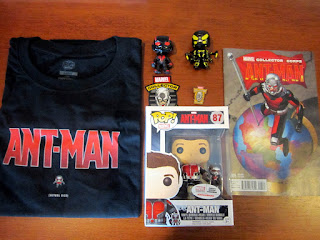 The contents this time:
Shirt
Comic
Pop! figure
2 blind box figures (with 4 possible figures)
Pin and patch
All of which are Ant-man themed

The shirt is nice quality and is from Pop! vinyls new clothing range. It gives me high hopes for that range as it is nicer than any shirt from Nerd Block and on par with several of the Loot Crate ones. The print leaves a little to be desired, it is cool and clever but that doesn't always make for the best of geeky apparel. 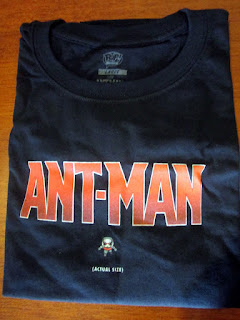 The figures this time are really good. I'm all for boxes that are mostly figures so I was bound to be happy. We get an unmasked Pop! Ant-man with exclusive mini Ant-man and two blind figures. The full sized Pop! is great and the mini figure is cool but it is claimed as a bobble head, which doesn't work very well. On the other hand the blind box figures are really good. It helps that I really wanted Yellowjacket and got him but they are also bobble heads and work great. 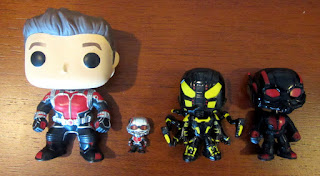 The last items are the comic, pin and patch. The pin and patch are great, the same quality as the last crates offerings. The comic was a nice read but does drop you in the middle of a story a bit. As it is issue number 5 this is kind of to be expected but in some ways I would have expected an issue 0 or 1. This is an interesting move since not many people knew much (or anything) about Ant-man before the movie, so it does tie in well that way. (I assume issue 1 covered some of the origins, much like the movie...) This poses the same issue I was worried about with Comic Block, how often are we going to be dropped into a story part way through, without knowing much about who is in the book? 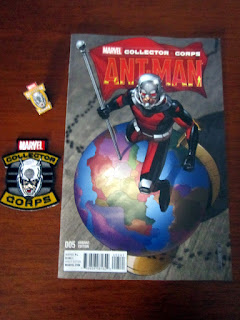 So the pattern of the Marvel crates is starting to unfold, with the first one containing a shirt (with 4 possible prints), Pop! figure, comic, extra figure, pin and a patch. It seems like you will always have something that has variable odds which is a nice little feature to go with the guarantee of a Pop! and a shirt. The next one (orders close on the 16th BTW) will really solidify what these will contain in the future.

So what is the value from this box? Well the shirt, Pop! and blind figures add up to about the cost price, so the comic, patch and pin are free. Everything is exclusive though so you could swing the values a bit that way. This does mean that if there is something in the box you don't like (particularly a bigger item) then you may struggle to find the value.

The next theme is "Secret Wars" which will be pretty interesting...

If you want your own you can subscribe here.
Posted by LavaJohn at 20:58