For Mays loot review I received a Loot Crate and the new Comic Block from Nerd Block. Pricing structures below: 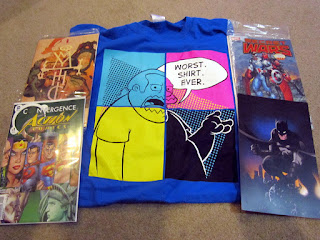 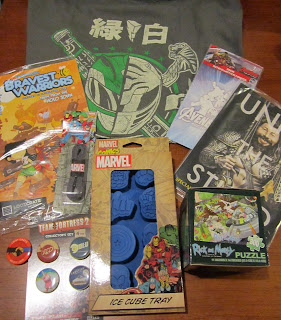 This Loot Crate had some great stuff, the wife loves the ice tray, the shirt is cool and I quite liked the badges. I'm not really into Mad magazine and this month the Looter badge had 2 variants, which bugs my collector senses. There is nothing in this one that I wont get use out of which is always good.

The comic block wasn't too bad. The comics were all decent choices and a good read, the DC and Marvel ones are limited edition covers too. The shirt is good, far better than some of the ones in sister blocks past. The Batman print is nice too. The main problem I have with the block is that I'm not sure how well it will hold up over time. There can only be so many first editions available and coming in part way through a story would really bother me. I was also disappointed that the first block contained an unsigned, not numbered print. A random collectible would have made this block perfect. Value-wise this just doesn't compare to the Loot Crate (for just a $9 difference) and I could buy the comics for ~$20, less for digital copies. I've dropped this crate for these reasons.

Loot Crate - June theme is Cyber
Posted by LavaJohn at 14:23