I have spent the last two weeks working hard on my Elves, trying to get them done as efficiently as possible. The weather has been a limiting factor in getting spray painting done but I am now down to just 2 Drakons to spray paint. In that time I also managed to paint 60 more elves, leaving me with just the cavalry and bolt throwers to get done. Pictures are below.

No group shot this time as I am part way through the multi-basing process. Unfortunately my original plan of making the bases and removing the circular tabs from the elves feet fell through. It takes far to much time and effort to remove so many, so I am attempting to use builders putty to fill in the spaces. This is also proving challenging. Even painting them will be difficult, I may have to do them in stages. This is why it was so important to have a month or so to get them done!

I've also made a start on my Scourge for DZC. My initial test model has been re-done as I am a little tired of having so many models in dark colour schemes. I am trying for something lighter for a change. They are just a distraction while I wait for spray paint to dry on my elf cavalry though, so will take a while to finish. Basing the infantry will be a challenge, I not used to the much smaller scale when basing. I also picked up some Dust stuff recently, I will add them in to the Wall soon, but that is another 40 models between Allies and Axis. And my Infinity starter arrived this week too...

I caved and picked up the Galaxy Lootcrate. My Nerdblock arrived the following day so I can do a comparison of the two. First up is Lootcrate: 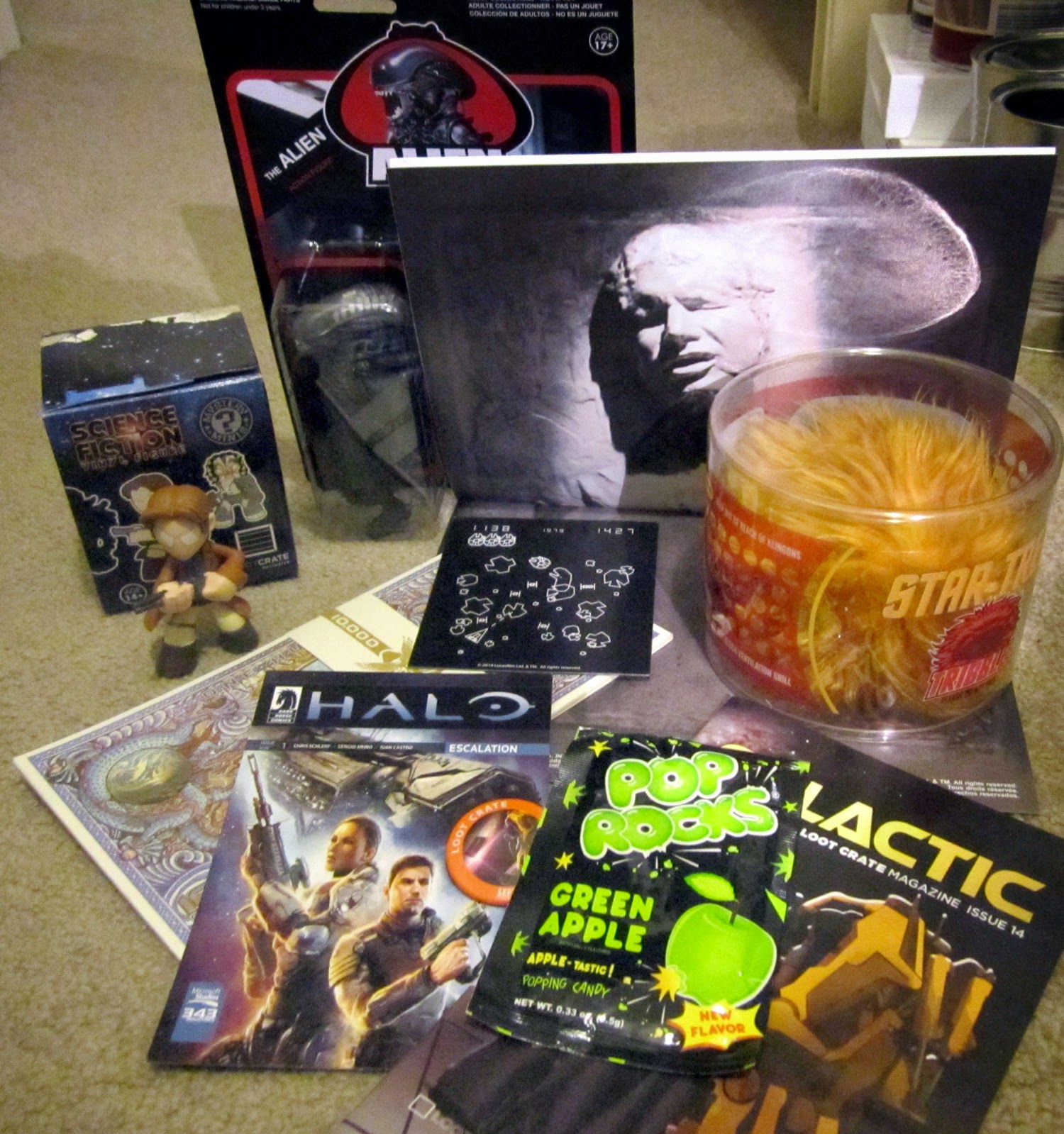 This month came with: A Firefly Mal figure and money, Tribble, Retro Alien figure, Star wars magnet and poster, 3 digital Halo comics, pop rocks and a lootcrate badge. I was quite lucky with the alien figure, the other 4 figure options weren't that great. The tribble is pretty cool and I enjoyed the Halo comics. Next up, the Arcade block: 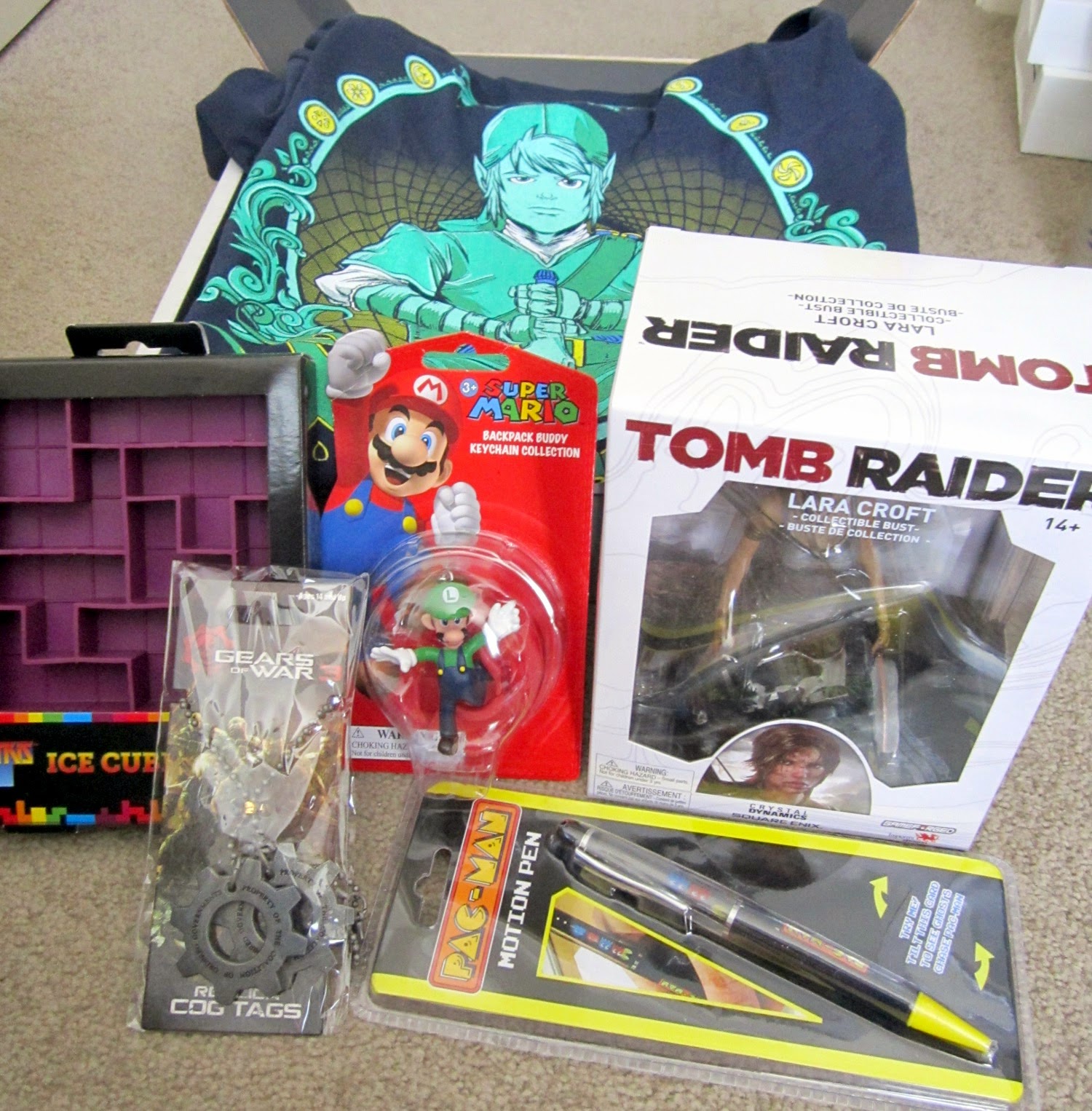 The arcade block contained: A Legend of Zelda shirt, Tomb Raider Statuette, Pacman pen, Luigi keychain, Gears of war dog tags and a Tetris ice tray. The shirt print is good, I really like the ice tray and the statue is high quality.

So for the comparison, the Lootcrate cost me $51.80 and the Arcade block cost $39.75. I felt that the Galaxy theme of the Lootcrate was good, but expected Star Wars to be represented by more than just a poster and magnet... That being said, the tribble is neat, as is the Mal figure. The wife has already claimed the firefly money too. I would be much less happy with this box if the Alien figure was one of the other options.

The Arcade block was good, even if I just kept the shirt and the tetris tray I got my moneys worth out of it. The biggest issue with Lootcrate in general is having to go through Youshop to get it and the fluctuation in shipping as a result. I think Arcade block wins this time, so I am glad that I am going that way in the future!

Day 278
264/278 Painted/Days passed
264/334 Painted/Bought
Goals:
Build a permanent gaming table.
Build a Kings of War army for playing with.
Complete my entry for the terrain competition.
Build and paint a set of Deadzone battle groups.
Build and paint a full Malifaux crew.
Finish all of the Dreadball teams and MVPs.
Finish painting an Infinity group.
Make some headway on my Warpath fluff.
Posted by LavaJohn at 21:04