Hey I remembered to post this week, huzzah! So this was a particularly busy weekend, with a Halloween party on Friday evening and Rallypoint all weekend. The party was fun, there were some nice little costumes and quite a few liked what the wife and I were wearing. No pictures yet as my camera was still set on 'models' mode when people were taking pictures, so they all came out blurry. I hope to get a photo up soon though.

Rallypoint is the annual Hamilton event for non-GW games. This year I was playing the PG role and doing demos instead of playing in the tournament. I also took a couple breaks to play some Infinity and Zombicide. The Infinity games were a bit of fun, Knightwolf and I got a win each, we seemed to both get convincingly smashed so we do need to get our heads around our models and when to hold back, rather than rush forward. Dice played a factor for us both and a little was put down to the table layout too. Unfortunately we were so preoccupied playing that I forgot to take any photos. Oops...

The Zombicide game was epic. We were doing quite well, right up until a spawning got one of our survivors killed and flooded the board with zombies. It all went downhill from there, until this happened: 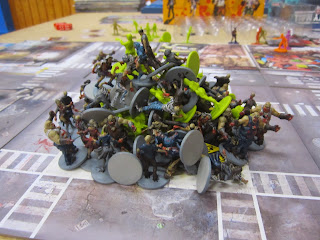 Yeah... That is every zombie from the base game and all the toxic zombies, in a pile, in a single square... We managed to claw back a win though, setting fire to the pile (worth about 100 xp) with a flame-thrower and finishing the scenario, which required us to get to that square while it was zombie free. (Get to the choppah! quite literally)

I managed to start assembling the last 2 Haqqislam models which should be ready for under-coating this week. I also received the (almost) last shipment of Dreadball, which has had a few parts delayed. With some luck I will get them together before the end of the year!