The December Marvel Collector Corps crate theme was "Guardians of the Galaxy" and cost $45 USD, or about $70 NZD. This crate has been slammed pretty hard online and I'm posting it up pretty late but lets see what we got. 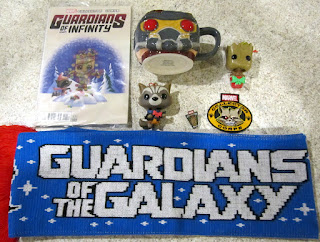 So I accidentally wiped my camera memory card before pulling the pictures of everything still in boxes so this photo is all I'm going to do. If you have seen the past crates I've posted I'm sure you can guess why the internet was furious with this one...

Lets start with the big item, the mug. It is a 3D mug, an exclusive version to fit in with Funkos mug range (like this.) I said this with the Venom mug I got from Loot crate, I hate this kind of mug. They are hard to use, ugly and have to be hand washed. At least this one has a passable paint job, but a simple printed mug would have been WAY better. A lot of nerd-rage was around this replacing an actual Pop! figure, which everyone would have preferred, myself included.

Replacing the shirt this month is a winter themed scarf. It is a nice scarf, feels like it is good quality and the pattern is good. Its a shame that this arrived in the middle of summer and that it doesn't get cold enough for me to ever wear scarves. Would have preferred a shirt, much like most other people not living in the colder climates.

The two ornament figures are the high point of the box but I am unsure as to who thought making bobble heads into ornaments would be a good idea. As it stands, the figures can't stand by themselves so I will have to hang them to display them, making them no longer bobble...

That leaves the comic, pin and patch. The cover on the comic is nice, but the actual content of the comic is a bit poor. Half of it is about Thing, with cameos from Rocket. Pin and patch are good and will add to the pile.

So this was a huge letdown of a box. It furthers my stance that holiday themes are a bad idea and that Funko/Marvel had a good formula to the boxes so why change it? After the feedback they have had I imagine things could go back to the old formula pretty quickly, but it may not be soon enough. The next box theme is "Deadpool" which leaves me in a sticky situation. I could drop the subscription because of this box and miss out on some cool stuff (assuming they learnt their lesson), or choose to keep the subscription and end up with more junk (because Deadpool may already have been finalised). It is a lot of money to gamble with and I have to figure it out before I am billed in February. Or forget and have it decided for me, whatever works!
Posted by LavaJohn at 21:33