Another week down and time just keeps on ticking... So this week I have wrapped up the last 6 models in my Dystopian Wars French fleet, only a week late, no less. I have to say that I am rather sick of painting this colour scheme now, that initial coat of white spray really didn't do me any favours. The paint just tries to pool together on the primer, this was most noticeable on the black wash over the whole model, which is what causes the mottled effect on the large white sections. I just dry brushed white back over this which gives the effect on all of the models now. I'm not certain I like it but it is far too late to do anything now! 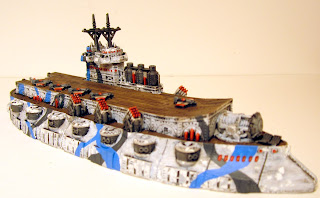 I did notice that some cool new models are coming for the French in September. I may be inclined to paint this scheme again by then, we will have to wait and see. The full size airborne battleship does look quite nice, I must admit.

To make sure I hit that minimum number of models per week I finished up the test model for my Abyssal Dwarves. But as I was sorting out all of my KickStarter goodies I noticed that I had used the wrong base size! The golems are supposed to be on 50x50mm bases, I had used a 40x40mm base. So that is why it is suddenly base-less after my last update. I am also considering changing the basing style as I wasn't completely happy with the prototype. More on that in the coming weeks. 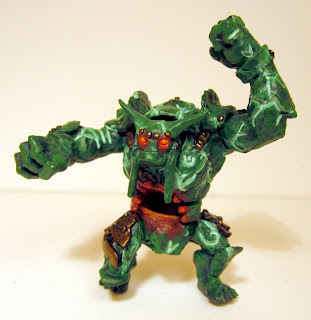 So my focus for the next couple weeks is finishing up the terrain that the club has paid me to do, that is why I have been a little slack this week. Although I have got 6 Robot Jacks painted up for Dreadball, they are just waiting for me to varnish them, which I prefer to do with larger model counts, since it ruins a brush. I have also been keeping myself busy on lunch breaks, I can trim mould lines from about 1 golem per day over lunch. I have prepared two in the last week (I was still trimming up Robots before that.) and figure I can get about four done on average. So in three weeks I may have all of my golems trimmed and built, a solid start indeed! In the mean time I have 7 Infinity models on my table, begging to be worked on... (Yes, if you look back I only had five models a couple weeks ago... I bought two more, ok?)

Speaking of terrain heavy games I decided that I need to make/gather enough terrain for playing such Sci-Fi games. To do this I need an overall theme and a pretty solid plan. I would like to make a full terrain board set because those always seem to look better than just scattered terrain pieces. Then, if I want to go totally crazy, it would be nice to have it painted and ready for Rallypoint, as a demo table, since I doubt I will be playing Warmachine or Flames of War. With everything else going on this may be unattainable, at least to the standard of table I want to try and make. Two months is a long time, I still have to finish off over 100 models! I need a really good plan, that is for sure.

I also finally got an air compressor. Having had an airbrush for years, it is about time. Except that now I still don't have the necessary hose! Arg! The only hoses I have managed to find so far come with an air brush... I need to look around some more and talk to some other guys but I may end up having to get a second air brush just to use the one I have...