Having finally recovered from travelling to Natcon I will give a brief run down on my experience there. The event format was unusual, day one had all players divided into pools of 6 or 8 (Covering the 2 surplus players) and playing off to see who gets into the top pool of 12 for days two and three. The round breakdown was 4-3-2. It was overall very pleasant not having to stress about performance on day two and the general vibe was positive from all involved by the end of the event.

I had the (dubious) fortune to have the least varied of all the pools, 2 Cygnar, 2 Menoth, 1 Legion and 1 Minions (Me!). This gave me some capacity to prepare for what I was likely to face, I expected to be playing up to 2 Stormwalls over two games and to have to deal with Exemplar Errants and their shenanigans. While I did end up playing both Menoth and Cygnar twice each I didn't see any of what I expected! (Seems the Wellington meta is quite different to the Auckland meta...) All up I beat one of each faction and just squeaked into the top pool by winning the last game on day one. (I would come to consider this major mistake #1 of the event...)

Days two and three are kind of a blur, the highlight was getting to play ex-Hamiltonian Scotty whom I hadn't played in some time. After going hard on the higher scoring zone I managed to grind out all of Scotts high Def Kayazy mercs but not before he had racked up 3 CPs... Ultimately I lost despite some seriously bad dice rolls on Scotts part (I think he failed 6 terror checks over the course of the game) and some awesome fire dice from my Gators. (Needing 9s or 11s to hit all 15 or so Kayazy...) Definitely a fun game for us both, looking forward to a rematch, hopefully at Rallypoint.

So I only won 1 game across days two and three (the last one of day three, no less.) leaving me in last place of the top pool, netting me 12th place overall (Yay silver lining, I was unable to drop to 28th ish...) and highest of the Hamilton travellers. (I was the only one to make the top pool.) Overall I came away with Best Sport and my fellow Hamiltonians scored 1st (of the bottom pool) and Best Painted. So a good long weekend for Hamilton!

Painting - As my lovely wife has pointed out, I haven't posted much lately. That and I have started to fall behind after my big painting stint back in week 1. To remedy this I am declaring April as Zombie month! There are a few reasons for this:
So I can't really go declaring it zombie month without having some zombies done now can I? I have finished up 17 zombies in the last two days, pics below. 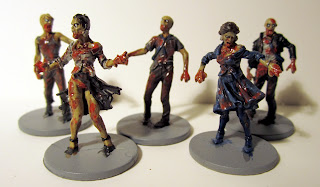 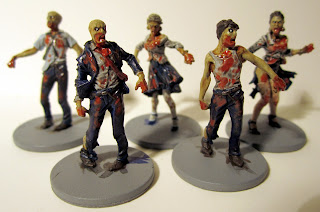 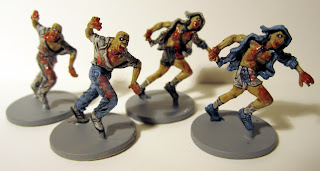 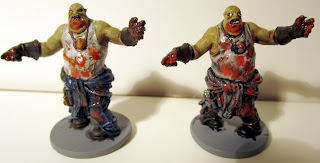 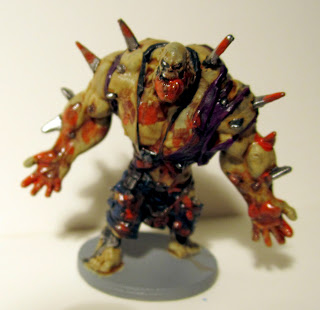 I hope to finish up all 71 of the Zombicide figures by the end of April. That should set me up nicely and rebuild my buffer of painted models. On the miniatures front Dreadball Season 2 should be shipping out within the next month or so and Relic Knights has been postponed from May shipping to November shipping. (5 month delay!) I'm not too upset about the delay as I am in no way prepared for another 100+ models showing up on my doorstep just yet. Some of you may have been hearing the rumblings of Mantics new Sci-fi skirmish game Deadzone, due sometime in the next few weeks. Looks like I have to set aside a few more pennies for that as it looks to utilise the Warpath miniatures and also release the Plague as a new Race. Yay for Sci-fi zombies in space! As for Sci-fi I have a work in progress shot of my forward observer for Mercs below, complete with glow effect. I just need to do some minor details and base elements to finish him up, then on to the rest. 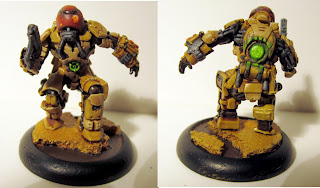